A bit of a flashback: when we arrived at Donner Pass we ate at a restaurant that was at the base of a ski resort. It just so happened there was a rock crawling event happening on the mountains’ arid slopes. Nicholas was frothing at the mouth. Jeeps with big knobby tires climbing up rocks—this was what Nicholas dreamt about. He asked if he could stay behind and watch. I gave him the fifteen dollars for the monster truck show, and I hiked on with Milkshake, Philly, and Giancarlo.

My first night camping alone. Or, at least without my husband. I was a true solo hiker for the evening, well, kind of.

Milkshake and I found Philly and we established it as our first official “GIRLS’ NIGHT!”

Nicholas had to stay in Sierra City to wait for a package. I again hiked on, solo. I made it to the top of a three-mile climb to find Milkshake and Philly! Clean Turkey soon arrived after me, followed by Patches and Mibs. All girls. “GIRLS’ NIGHT!”

Clean Turkey looked around, “I’ve never camped with all chicks before.” Her eyes grew squinty as her smile widened, “sweeeeet.”

The next day was a solo march. I found Milkshake at picnic table in a campground. We ate lunch and shared a much needed pot of coffee. Caffeine for the win.

We eventually found Philly at the A-tree Spring. Set up camp for yet another GIRLS’ NIGHT! But just as we were wrapping up dinner, there out of the darkened tree line appeared Nicholas!

“You don’t even have your flashlight out,” Philly noted in her posh English accent. “I don’t need a flashlight when I have these babies,” Nicholas pulled up his green shorts revealing fluorescent, neon yellow boxer briefs. We all shrieked in shock and amusement. They were hilarious and startlingly bright, typical Nicholas fashion.

Some days are distinct; others blur into the rest. This one was blurred, a fuzzy replica of another hot day walking north.

There were several comments on Guthooks stating there was “the best swimming hole on the whole PCT” at the next river. We decided to treat ourselves to a shorter day and swim.

The climb was steep, but a perfect swimming spot was tucked beneath a arched bridge. Rocks provided launching pads into the deep, cool water. 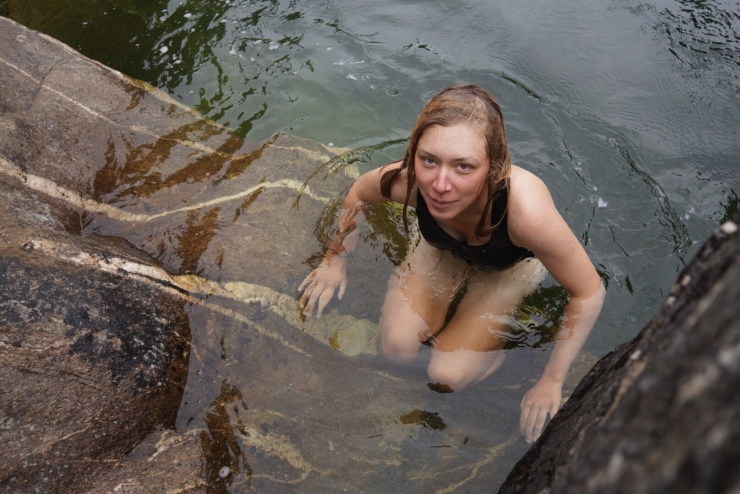 Giancarlo randomly appeared and joined our swimming party. Nicholas proceeded to jump off the highest rock possible and off a sketchy waterfall, typical. 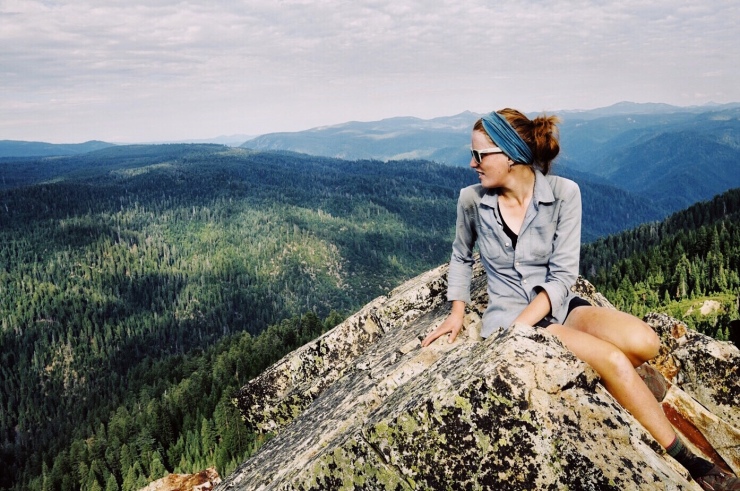 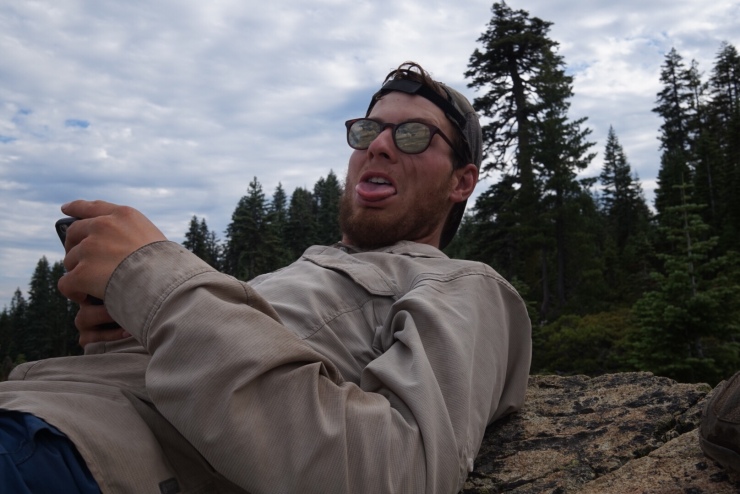 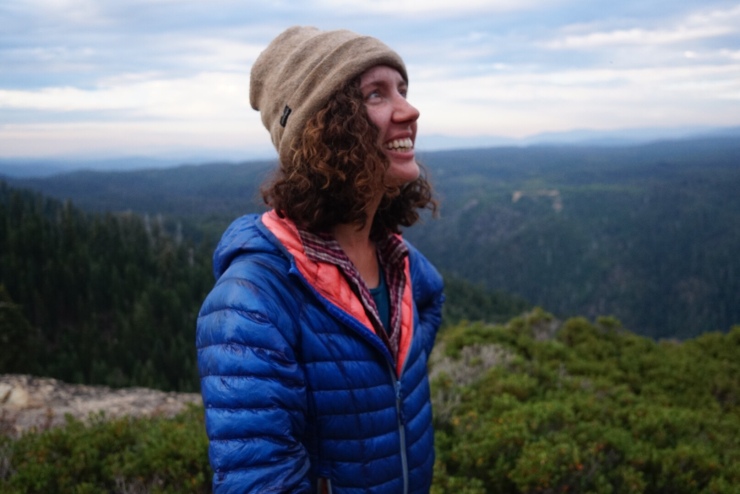 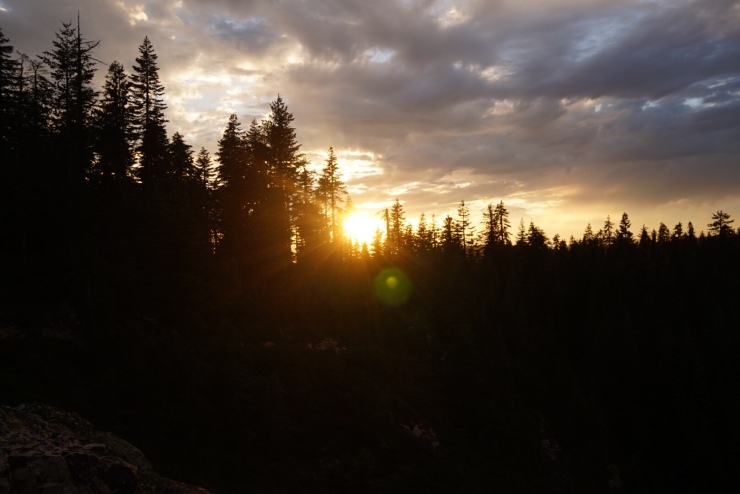 36 was the number of switchbacks that remained between me and Belden. The day would total 27 miles, my longest day on trail. I was determined and partially, if not totally, motivated by an ice cold beverage. I never appreciated a cold drink prior to the PCT. Now the mere thought of a sweating Gatorade had the power to make me hike miraculous miles. 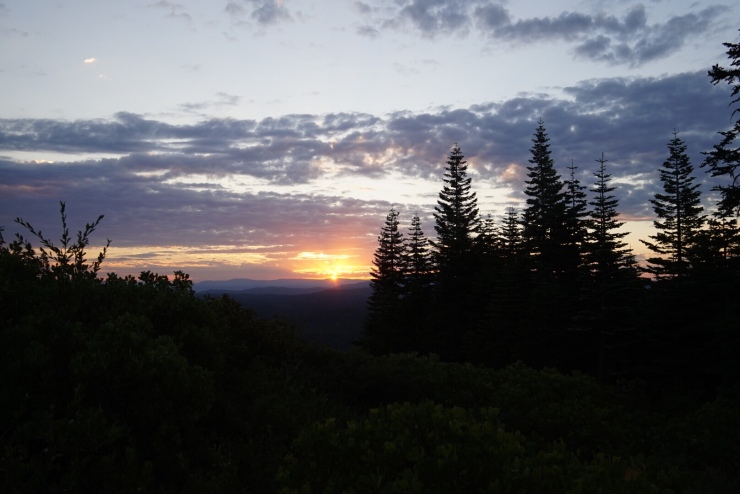 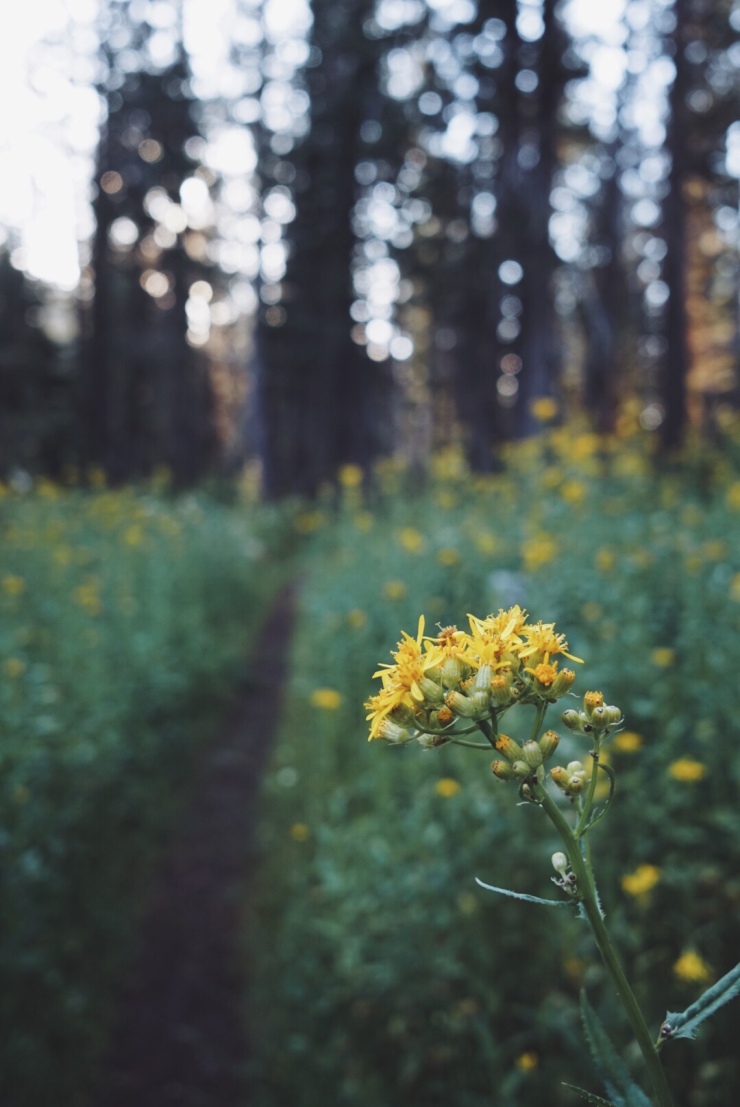 I arrived at a porch full of packs and stumbled into the store for a Gatorade and blood orange soda.

We ate, set up camp on the sandy riverside, and took a dip with Ken, Maui, and Mountain Goat.

Since I went swimming in my only pair of shorts, I ran into a problem. It was 93 degrees, and I didn’t have any underwear (I lost them) or cool bottoms to wear to bed, only wool long-johns. Nicholas said I should sleep nude, or nude from the waist down. I really had no other option, so I did. I resumed Winnie the Pooh Bear slumber status.

Feeling the mesh of our tent become wet, I hopped outside completely bare-assed and set to work. I could only imagine Mountain Goat waking up to see the white glow of my ass skipping around my tent in the darkness of night.

The moon was bright and a bit pasty.

Nicholas woke me up to a handful of blackberries. Wild bushes lined the riverside, and Nicholas knew he needed to bribe me. Coaxing me with blackberries worked. I emerged out of the tent to find our hobo gear drenched.

We left our stuff out to dry while we went to Caribou Crossroads. We ordered breakfast and their famous blackberry milkshakes.

The heat was oppressive. I would guess ranging in the high nineties. The river provided relief as we debated what time to hike out. We all dreaded the thought of attempting the 13-mile climb in the heat, and ended up pushing on at 5:30 in the evening.

I climb mountains for breakfast. Seven miles broke my fast for the day. I crushed 14 miles by lunch.

Nicholas suggested we hike 11 more. Then he suggested 13. I agreed, but I was tricked into walking 14 more miles. 28 miles was my biggest day. My legs and feet screamed. Instead of being stoked about my accomplishment, I was grumpy.

We reached the halfway monument! 1,325 miles marked by a stone post. It took us nearly three and a half months to walk to this spot and now we had two months to walk the rest. I felt mixed: excited, proud, sad, worried. I hoped we would be able to finish in time. Nicholas had return to work by October 1st. I wasn’t worried about him finishing in time. I was concerned we wouldn’t finish together. He’d trudge on making big miles while I reached the northern terminus later. Whatever the case, I was proud we’d come this far. 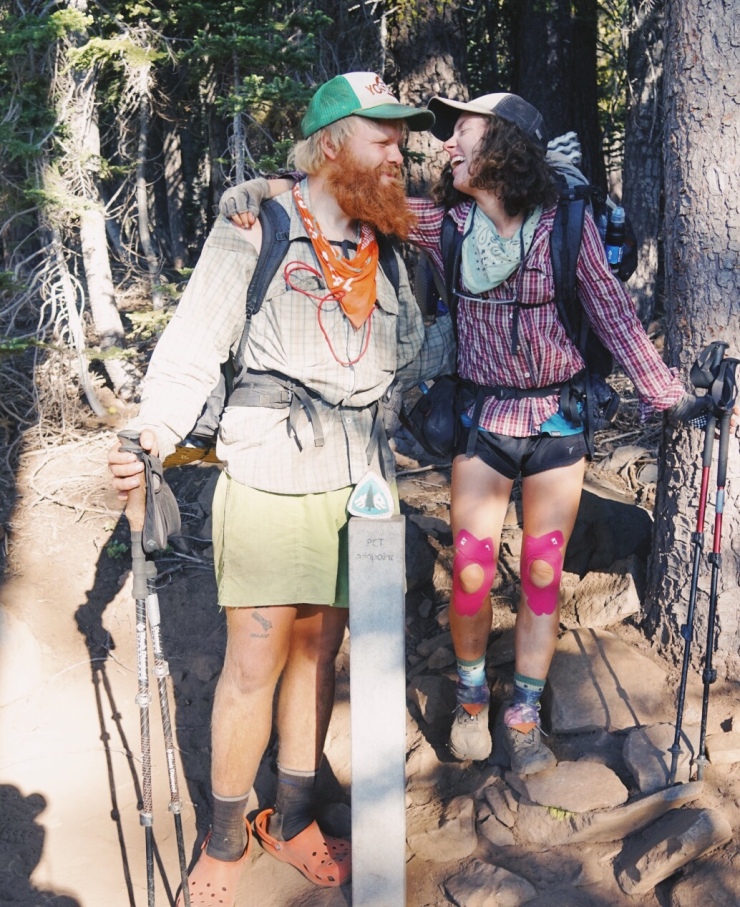 The town of Chester broke our hearts when we discovered the all-you-can-eat pizza buffet was canceled due to the warmers being broken. Bad luck turned into extremely good luck, however.

As we were returning to the church that allowed hikers to camp, Macro pulled up in a SUV. “Hey! Do you want to stay with this trail angel, Rosy? She has a pool.” A woman with dark-rimmed glasses smiled enthusiastically and waved.

We notified our group and stealthily took down our tents among the twenty hikers set up on the church’s lawn.

Rosy brought us to her beautiful suburban home. I took a shower; we washed our clothes; she fed us margaritas, salad, and chili; we went in the pool. It was magical. 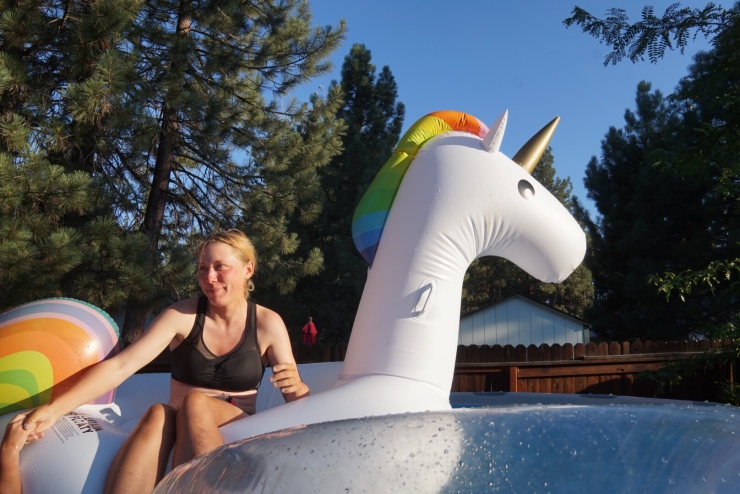 She was a real angel.

Leaving trail magic was hard, but we managed after Rosy made pancakes and smoothies. (She was the best.)

We managed to squeeze out 15 miles to the boundary of Lassen Volcano National Park.

Lassen, like other national parks in Cali, has a strict rule about having a bear can while camping in the park. This meant we had to hike through the entire park, 19.5 miles, in one day because we had already sent home our bear cans.

After a mile into the park, I saw a blonde black bear. (Obviously, California bears have more fun.)

We were tempted by an early break at Drakesbad dining hall. Milkshake and I got soda. Liquid sugar was my newest vice on trail. I never liked soda before, but there was something about the syrupy fizz that hit the spot. Milkshake ordered chips and salsa; our stay was complete after consuming three baskets. 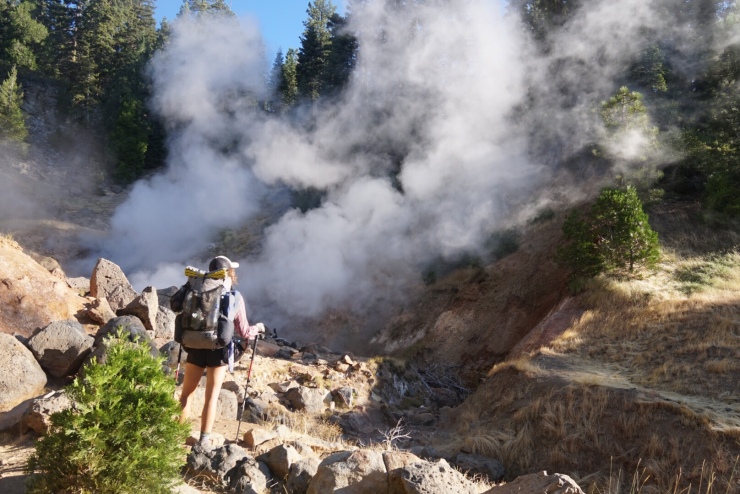 JJ’s Diner had the best Nutella milkshakes—sprinkles, whipped cream, and chocolate-hazelnut goodness. Old Station was only a .5-mile side trip and well worth it. I mean, I was in heaven: a milkshake, WiFi, and a fountain Dr. Pepper.

Hat Creek awaited us after the Subway Cave. Milkshake, Philly, Nicholas, and I relished in the forty degree blackness before starting the notorious, dry stretch of Hat Creek Rim.

I powered up the climb despite the heat, a podcast distracting me from the hill, the lava rock, and sun.

A cooler of ice cold water greeted us after ten miles, and a yellow-sprayed sunset after two more. 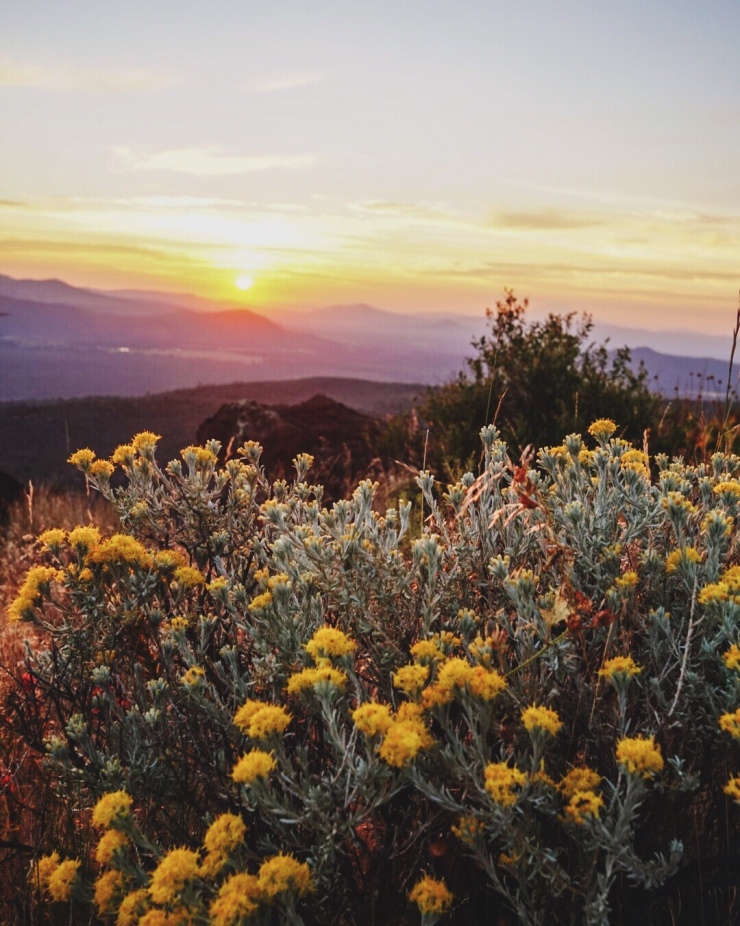 It was so, so, so hot. We stopped at the Burney Mountain Guest Ranch, 20 miles later. Refreshments were available, but our respite was short.

We camped .5 away from the road to Burney. It was another sticky night. Living in a 3×6 foot tent with another person is not glamorous. Not only are we constantly throwing elbows, but we have an intimate understanding of each other’s stench—BO, foot crud, sour skin, and farts.

Night filled our camp and was accompanied by rats, giant rats. Philly flipped on her “torch” several times to see where the racket was coming from. Milkshake was apparently shooting rats off her pack. Nicholas was having staring contests with the creatures as they nested on his pack. In the morning, Milkshake discovered her trekking pole straps to be chewed off. I learned my pee rag (yes, pee rag) was carried away along with my compression sock.

Our hitch into Burney was easy. McDonald’s served our hiker needs of refreshments and WiFi. We had booked an Airbnb but couldn’t get in until 4:00. Chores followed after we exhausted all possible WiFi needs.

Milkshake and Nicholas had brainstormed the idea of having a Harry Potter marathon. This idea was brewed up in the desert, 800 miles ago. Now it was happening. We started the evening before and did nothing but eat and watch Harry Potter. Root beer floats were consumed hourly.

The bed was our first since Mammoth, so a month and half of nothing but the hard ground. I melted into the soft mattress and knew this was one thing I missed the most, a bed.

The last Harry Potter movie brought tears to Philly and my eyes. SNAPE LOVED LILY. We had finished the marathon just before check out.

Burney Falls was one of best waterfalls I’d seen on trail. Nicholas and I smacked on oranges while the ribbons of water misted us. 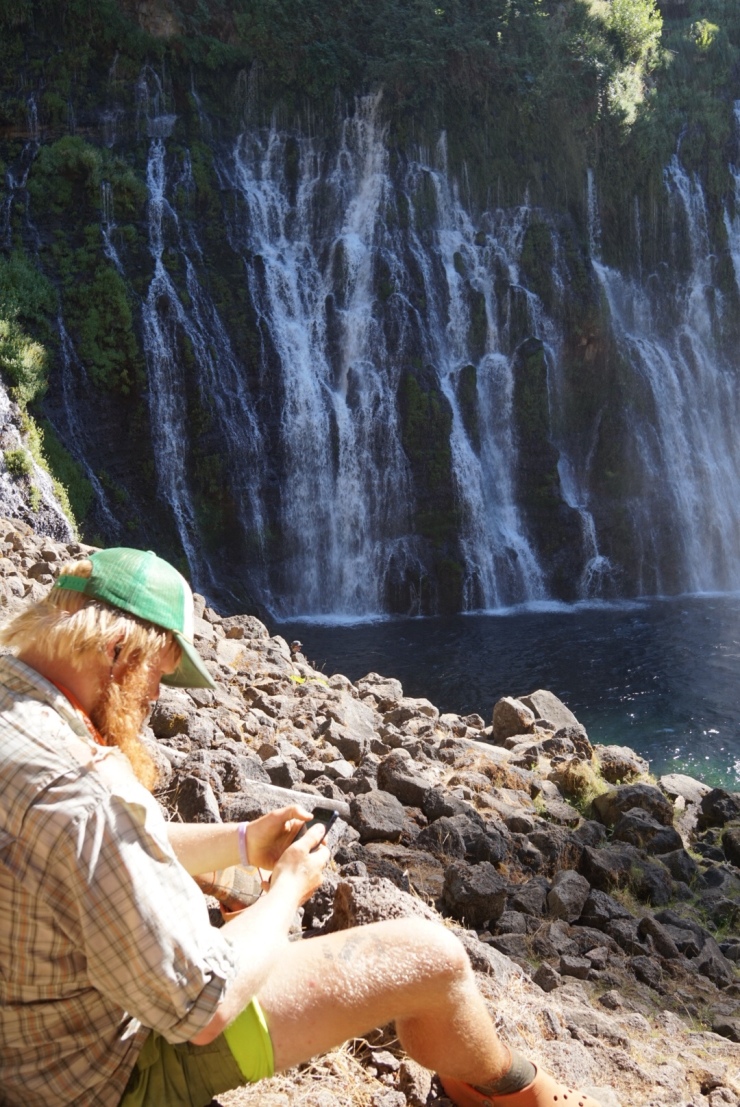 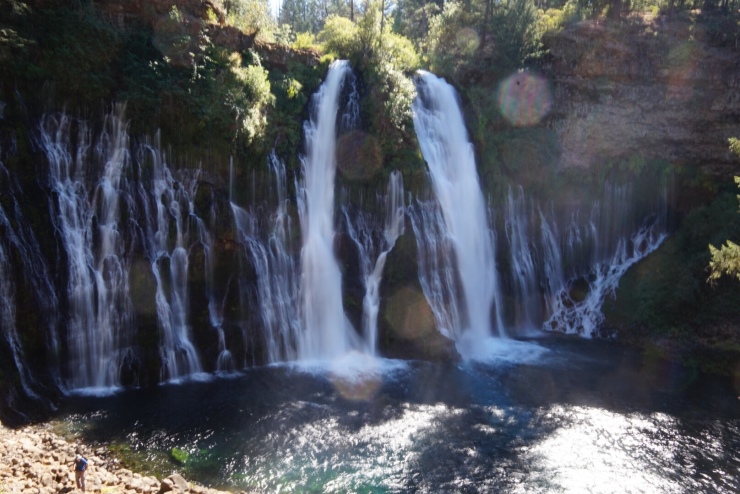 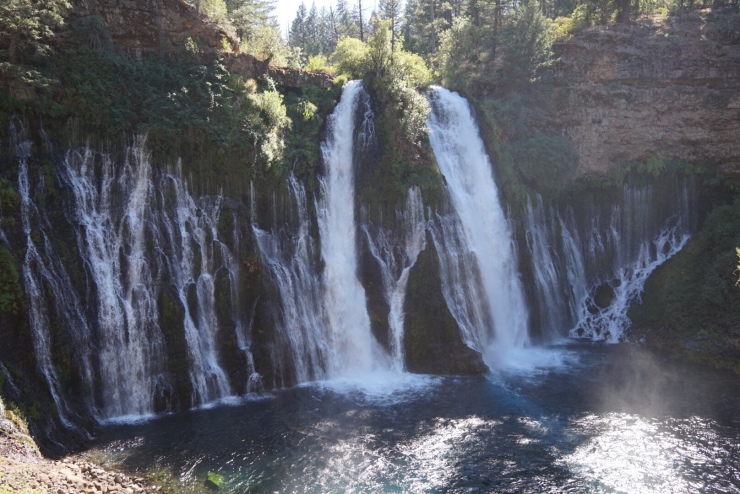