We resupplied at Yogi’s store Triple Crown Outfitters. I read the snow report on the wall. Hikers were emailing saying the conditions were bad, that they were post-holing up to their waist. While Nicholas found the posts hyperbolic, I felt uneasy. I considered buying an ice axe but decided to wait.

The original goal was to leave at 10 a.m. but time escaped us. We were rolling by one p.m. and rounded out the day just shy of nine miles due to a thunderstorm. 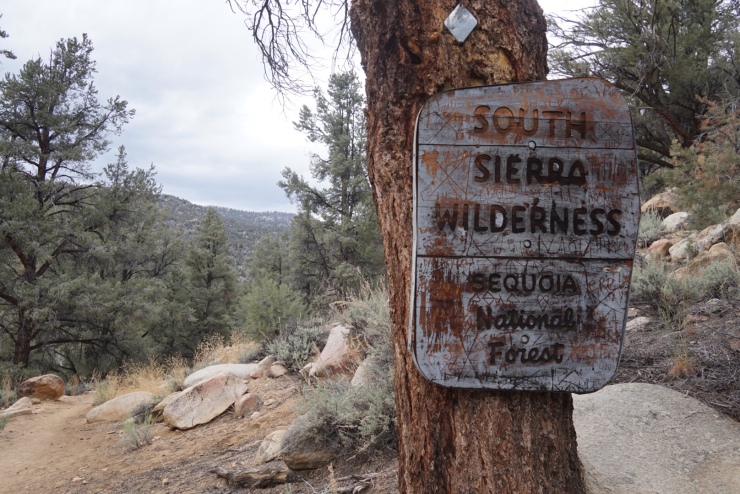 I started early and alone, traveling through frosted meadows, the grass and flora a soft white. The Sierra was all meadows and pines and precipitous peaks. Oh, and lots of water. It was strange thinking how not but three days prior we were still hauling water during 10- to 20-mile dry stretches.

Golden left the same day as us. I naturally thought I would never see him again. His fast legs moving him along at his 25- to 30-mile speed, but this was the Sierra, and even the fastest slow down. I caught him three miles from camp. He confessed he was impressed we were here. “To be honest I did not know if you were going to make it. But now I know you will,” he said. 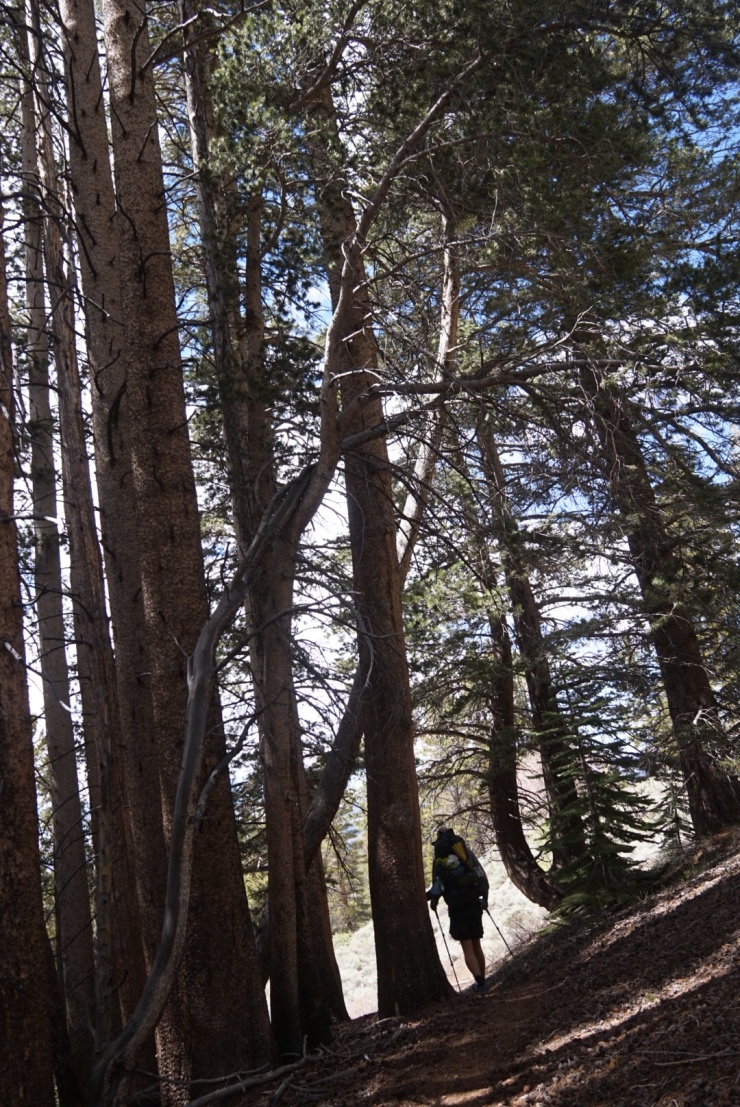 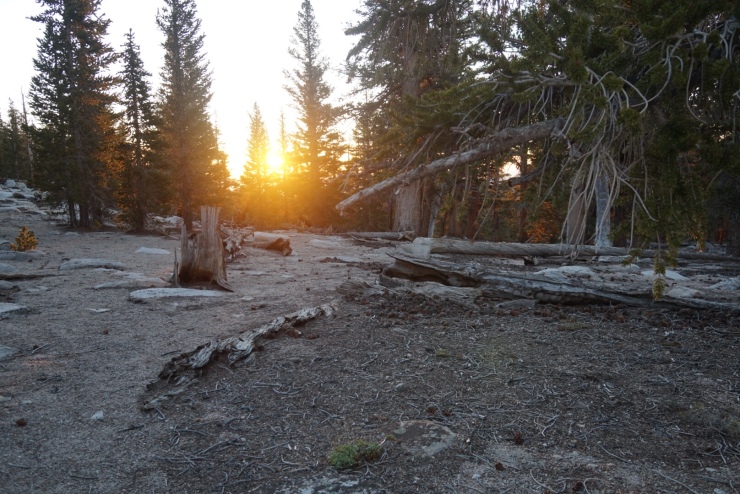 We were now consistently climbing at 10,000 feet and higher. I could feel the altitude slow me, making my steps sluggish.

Five miles from camp I found myself in yet another thunderstorm. There were trees this time so I was less worried. But then there was lightning. A clap of thunder sounded and a bolt flashed before I crossed an open sandy stretch. I was scared and sprinted across the trail.

I was beginning to think my trail name should be Storm Sprinter.

We had to leave the PCT to hike towards Mount Whitney, 12 miles off trail. Bandit hiked with us as we journeyed to Guitar Lake, a favorable spot to camp the night before heading up to the summit. We ran into three thruhikers who said two park rangers were threatening to ticket PCT hikers if they camped at Guitar Lake. Sequoia National Park now only let John Muir Trail hikers camp there.

We decided to search for a stealth spot. As we looked for a site, Nicholas locked eyes with a wolf. “Look!” I turned and thirty feet away was a grey wolf. It was big, as large as a husky. He ignored us and trotted away.

We found a spot a mile below Guitar Lake and planned for an early morning. 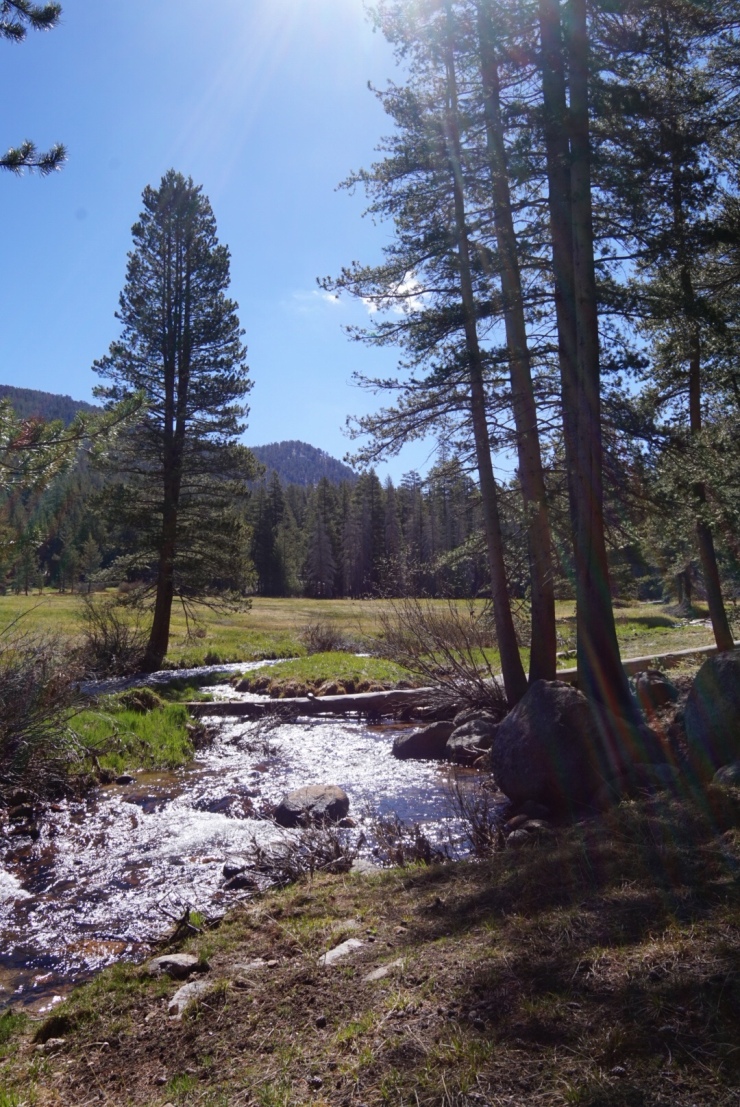 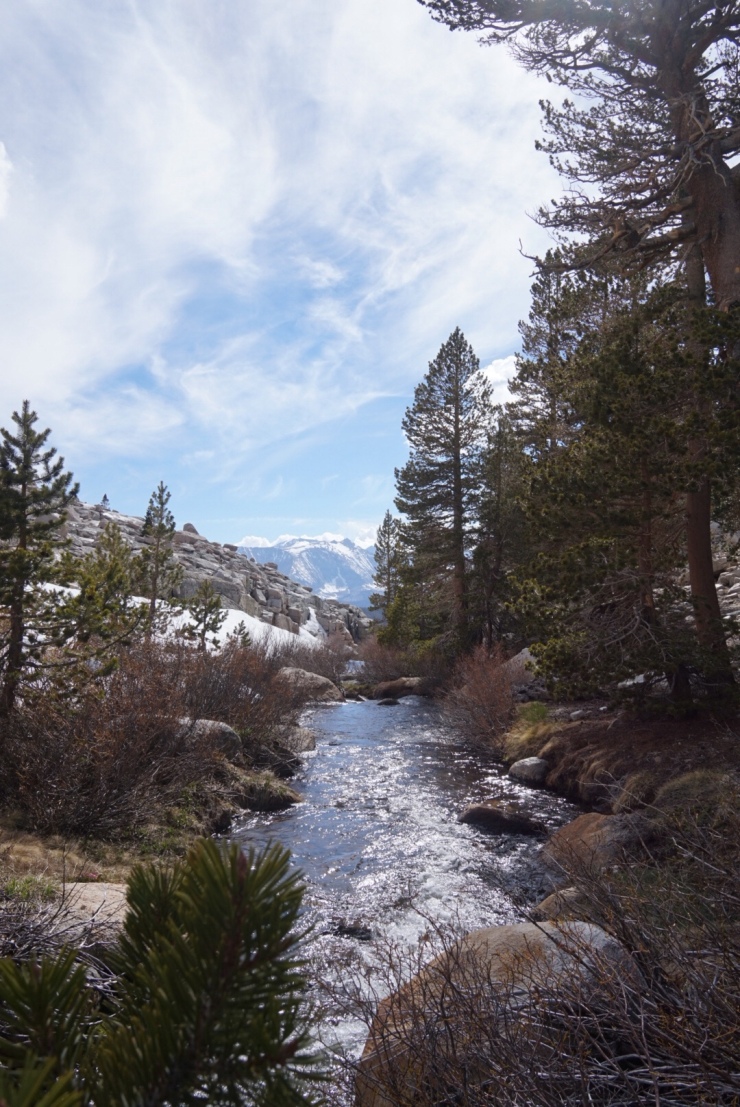 My eyes opened to a moonlit tent. I glanced at my phone, 3:25 a.m. Thirty more minutes, I thought.

The alarm sounded at 3:55 a.m. I unscrewed my sleeping pad and started my pack-up routine. We hit the trail under moonlight, heading up to Mount Whitney. 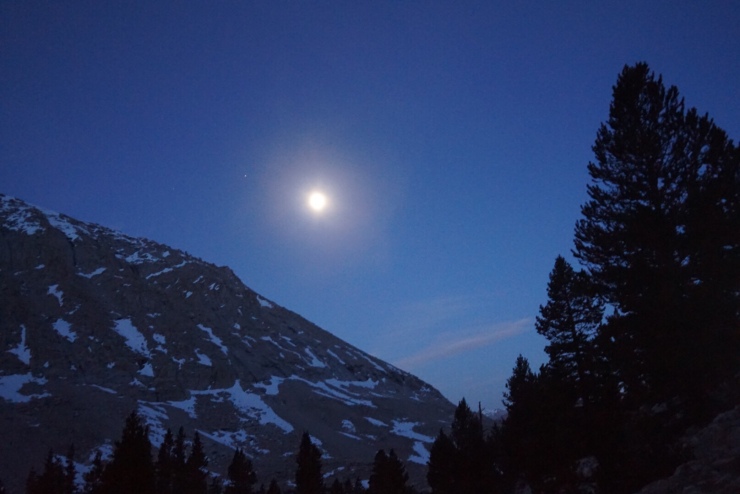 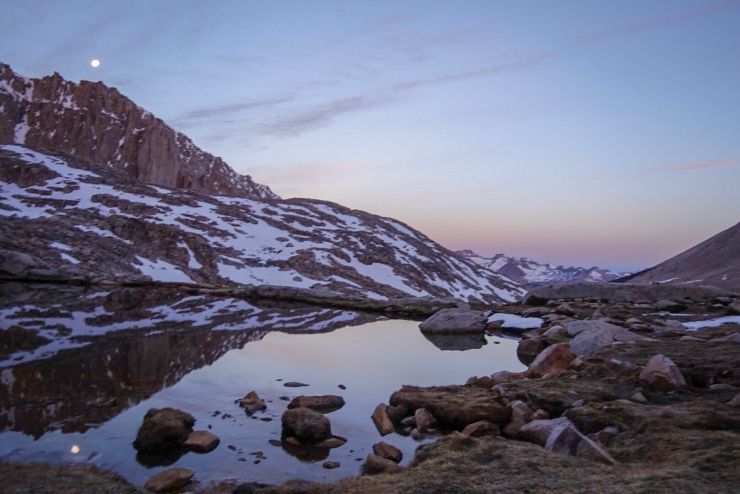 We passed a glassy lake in the shape of a guitar and rounded our way up a series of rock stairs that lead to Whitney’s switchbacks. As we climbed, the sky lightened and the air grew colder. Eventually Bandit, who was hiking with us, said it was time for microspikes. “Once you put them on don’t take them off,” he said. We donned our spikes and traversed snow ridge after snow ridge. My feet kicked into the imprinted steps as I slammed down my trekking pole into the snow on either side. I looked down and grew imbalanced. I leaned into the slope to steady myself and continued on. We navigated the serrated spine of Whitney, crossing foot-wide snow bridges.

The wind howled and my bare legs grew deep red. I was so cold. I put my wool legging over my shorts and thrusted on into the chill.

Every time I looked up to see Whitney’s summit I grew discouraged. The peak appeared untouchable. Far, too far. I focused on my feet and marched, eyes down.

I glanced up to see the emergency shelter, a small stone shack at the summit. Finally.

The views were intoxicating; I became drunk on the snowcapped peaks. I made it. The summit 14,505 feet tall and I 5’2” above it. 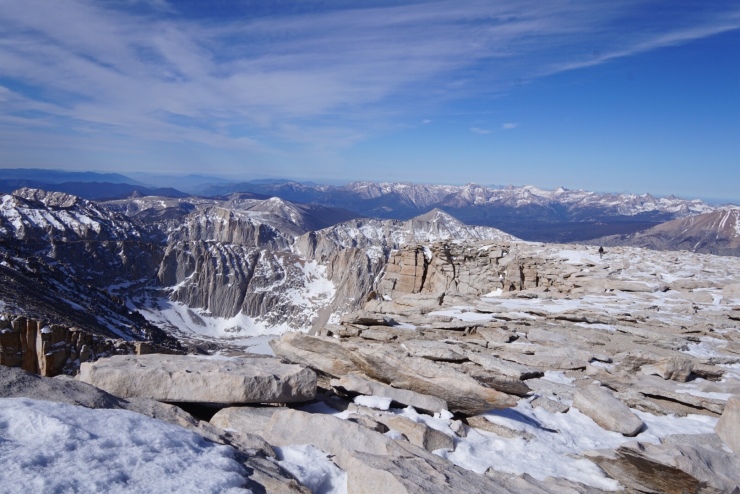 We had to make the sketchy trek all over again but in reverse. We both agreed it was our most intense and technical climb. Not everyone can climb a snow-covered Mount Whitney, but we did! We were proud. 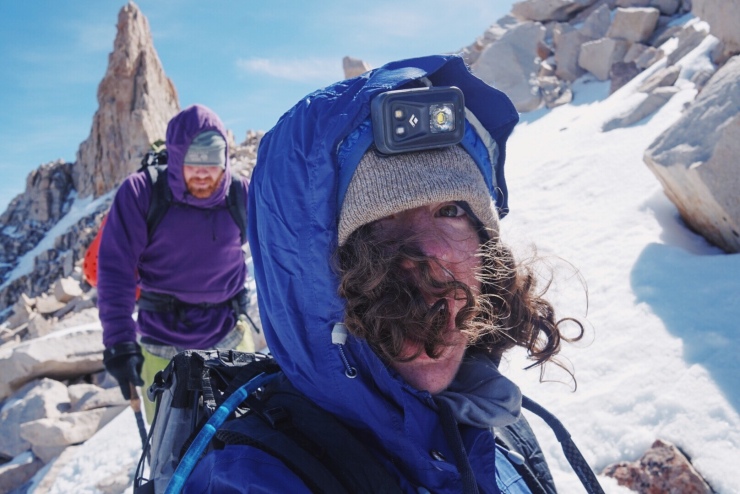 You would think after such a major climb we would relax, but no. We trudged six more miles to get to the base of Forester Pass, because that was tomorrow–a 13,200-feet-high pass over snow covered mountains.

Our second major hurdle: Forester Pass, the tallest pass on the PCT.

The approach was gradual, a series of snow fields. But as we drew closer, I could see the steep wall ahead, a mile of intense climbing up the shoot over to the north face.

The lower switchbacks were completely covered in snow. We had to follow kicked in steps that zigzagged up the steep pitch. I kicked my microspikes in to the “trail” and plunged my poles in deep, allowing the tips to bite the hard snow. 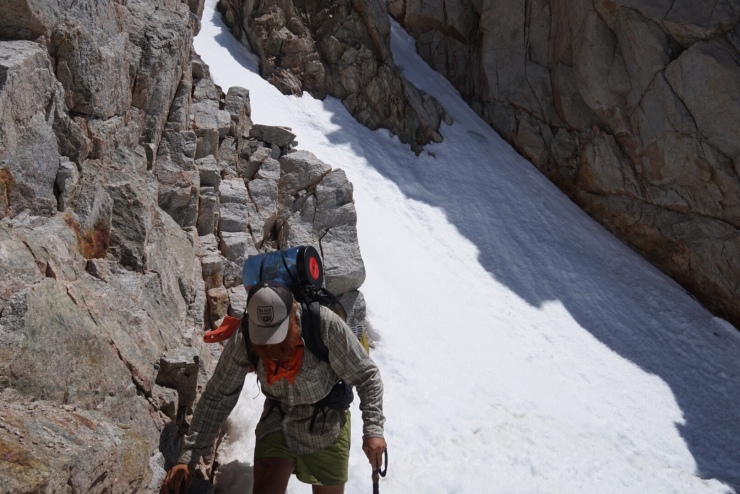 I eventually made it to the rocky switchbacks and then the shoot. A 30-foot-wide gap with a foot-wide snow bridge as our only way to cross. I went first. I avoided looking down the 2,000-foot snow drop. I focused on each step.

I made it to the other side and proceeded over the cornice. The north side of Forester was completely snow covered. We traversed and climbed down a sketchy rock cliff because we couldn’t find the trail. Nicholas post-holed up to his thighs multiple times. I searched for hardened snow to avoid snow up to my crotch, but I too post-holed. We eventually made it down the mountain and ran into Bandit. We hadn’t seen him since the summit of Whitney and were curious what he thought of Forester. He thought parts of Whitney were sketchier, but admitted that Forester was full on mountaineering—and that’s coming from someone who has climbed Everest!

We camped on the Bullfrog Trail Junction to make for a reasonable hike out Kearsarge Pass.

I finally received phone service after ten days of disconnect. Town was at the base of Kearsarge and then another 45-mile hitch. We graciously received two rides into Bishop.

Mexican, motel, shower, laundry, and a stroll to the cinema. 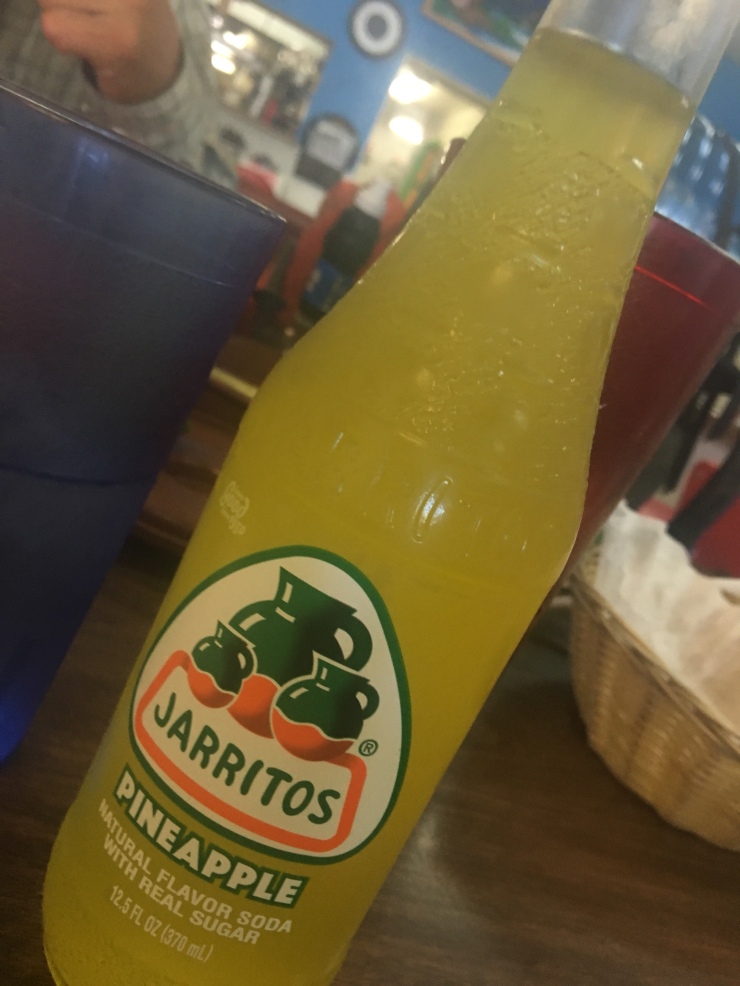 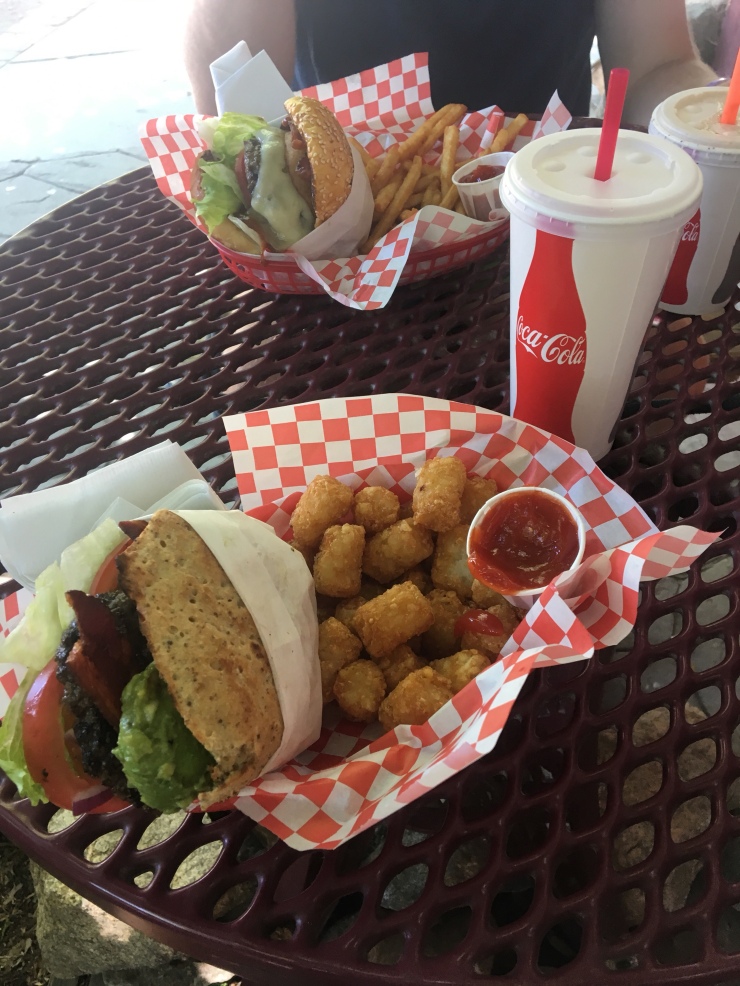