I hiked on a wave of dreamy, post-engagement bliss.  I floated my way to our next site nestled near Goat Haunt. We were greeted by three groups of hikers: two families and a dad-son clan. The sons were our age, and Nicholas asked them if they had jumped off the suspension bridge near camp. Thrill, danger, and adrenaline stormed their eyes. “No, but we are totally down.” “Sweet, but first we’re going to cross Waterton Lake into Canada and get some poutine in the town.” These guys thought Nicholas was a genius. However, the plan failed when we discovered passports were necessary for the ferry ride.

Jumping off the suspension bridge quickly resumed our attention. I was unsure if I’d do it. Although I wasn’t a stranger to cliff jumping, the icy river water seemed unappealing, especially with no towel. Nicholas was the first to plunge followed by the sons and father. Nicholas coaxed me for a few minutes before I realized I going to spend the rest of my life with my best friend–heck yeah I’m jumping in! 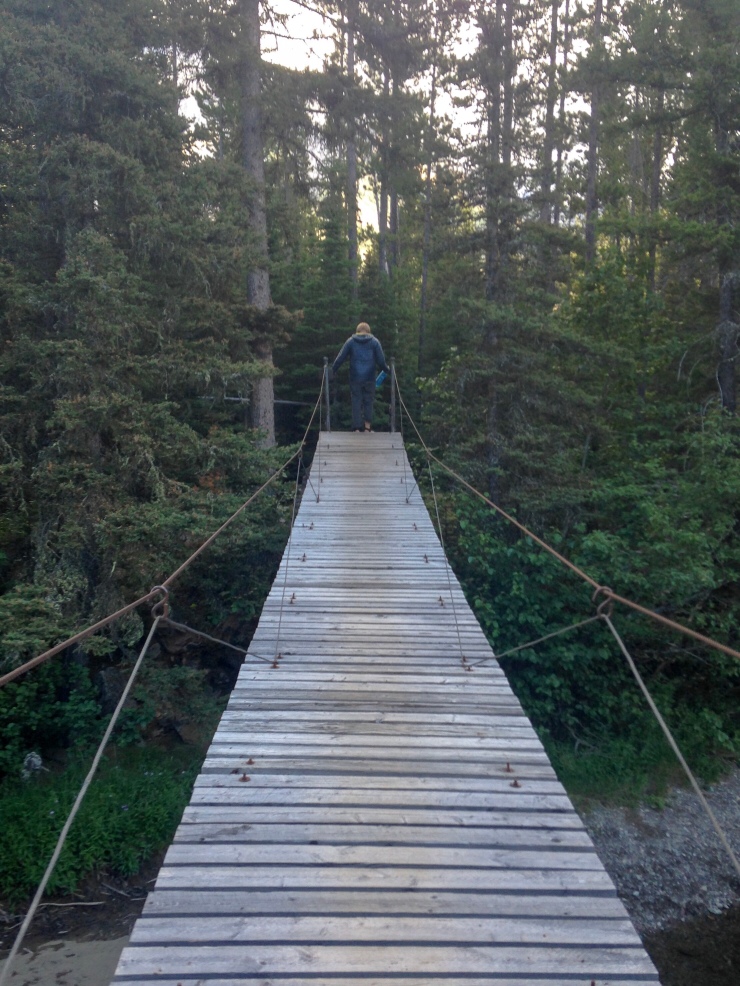 We shivered as we set up our tent and changed. Dinner was beckoning our stomachs, and as we looked through our packs we discovered something. Our cookset was missing! (Well, actually, our friend Peter’s.) I experienced a That’s-So-Raven flashback of me shoving the cookset under the bush at Thunderbird Pond, nearly ten miles back. “Shit!”

We had two more nights in the backcountry and no cookset. We decided to ask hikers at the other Goat Haunt site if they had passed it and picked it up. Turns out they had come from the opposite direction and would be passing Thunderbird Pond the next day. One of the hikers named Robin agreed to look for it and email me if she found it.

The father and sons graciously offered their stove for our meals, which is a big deal–fuel is precious. We planned on bumming a stove at our next site and hoped for the best. Lesson learned: check your gear twice.

The following day we headed 12.5 miles south on Waterton Valley Trail until our next site at Fifty Mountain. The hiking was glorious, one initial incline, but the rest was gentle switchbacks. We plopped down to take a break and take in the view. I looked side to side, as we were sitting among giant bushes and saw they were brimming with ripe huckleberries! I told Nicholas and we immediately began a huck-picking extravaganza. We ate so much the sweet-tart juice stained our hands and lips. 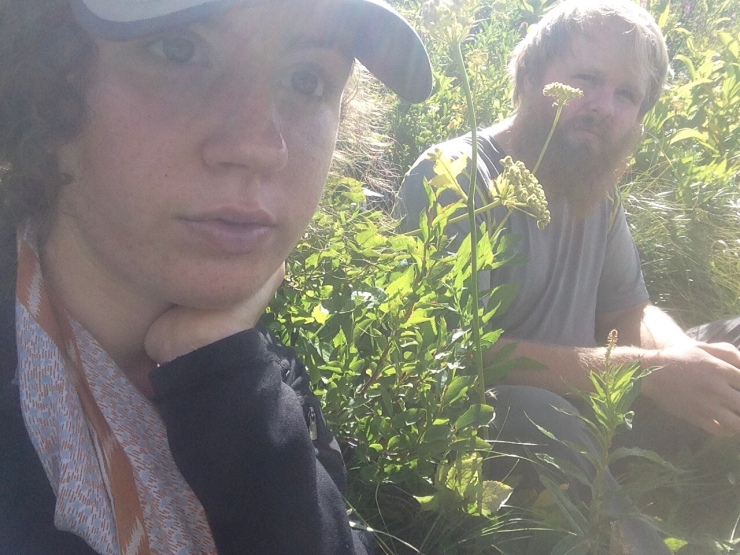 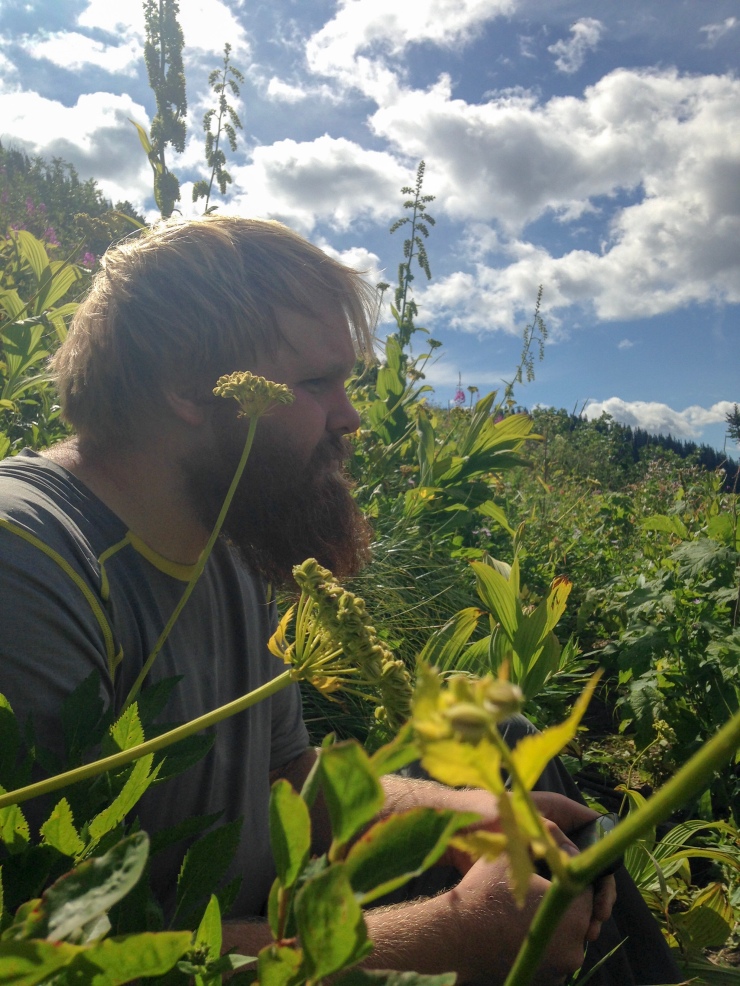 The trail took us through meadows of wildflowers and gave us sweeping Sound-of-Music views. I think I even twirled around Julie-Andrews-style at several points. Silly prairie dog creatures, called marmots, skittered across the trail. One marmot perched itself on a rock, looking intently at the mountains beyond: “Everything the light touches is our kingdom.” Lion King jokes, 90s kids, c’mon. 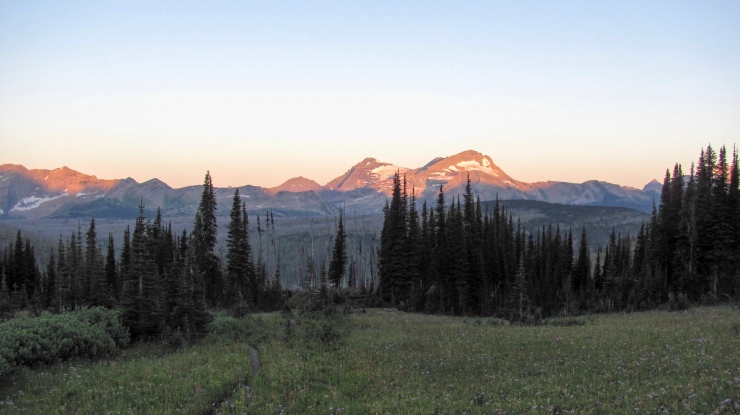 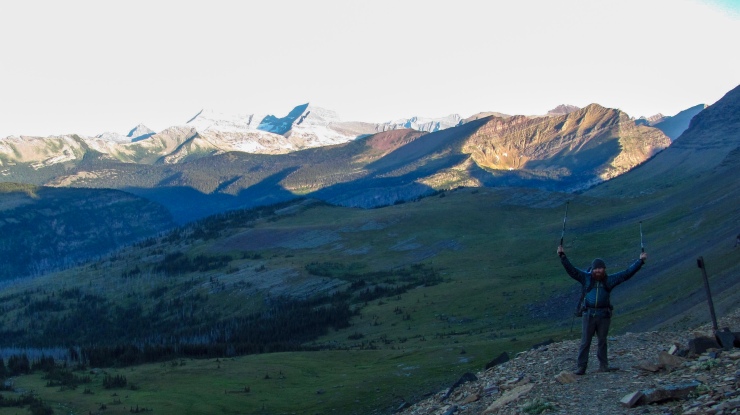 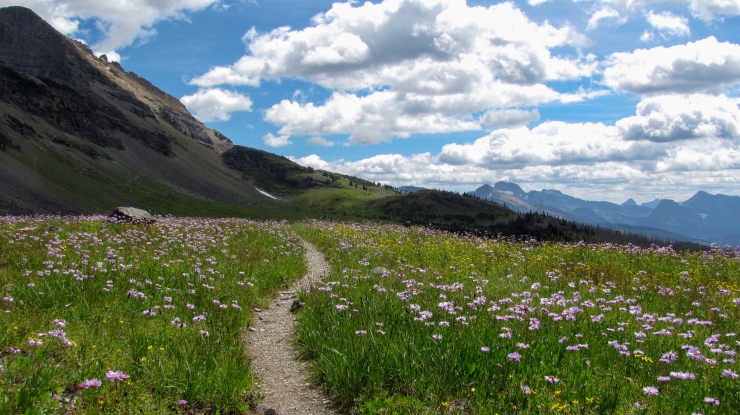 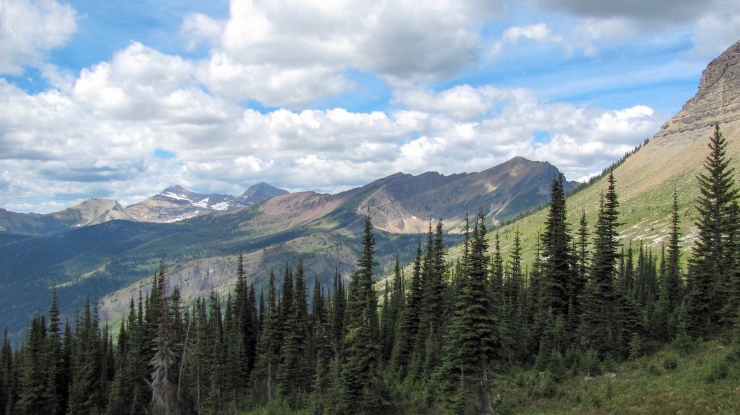 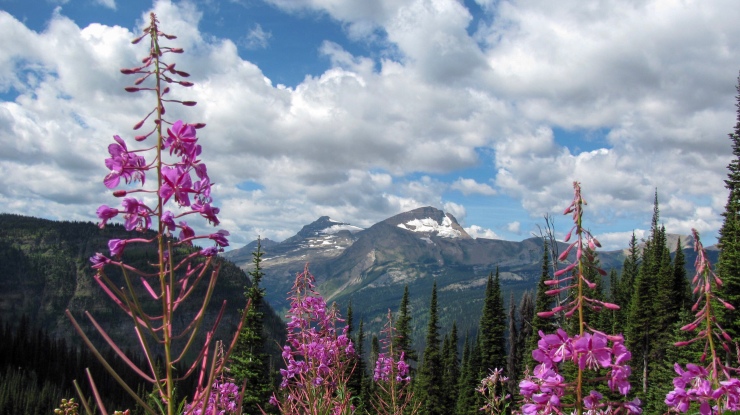 Our site was set before an old burn, the bare white trees ghosts of the past. Two hikers greeted us as we arrived, themselves only arriving minutes before us. They told us a ranger had to shoot a grizzly the previous night with rubber bullets to scare him away. This site did not feature Glacier’s typical bear bag hanging structure, but a metal bear box because grizz frequent it so often. Comforting. 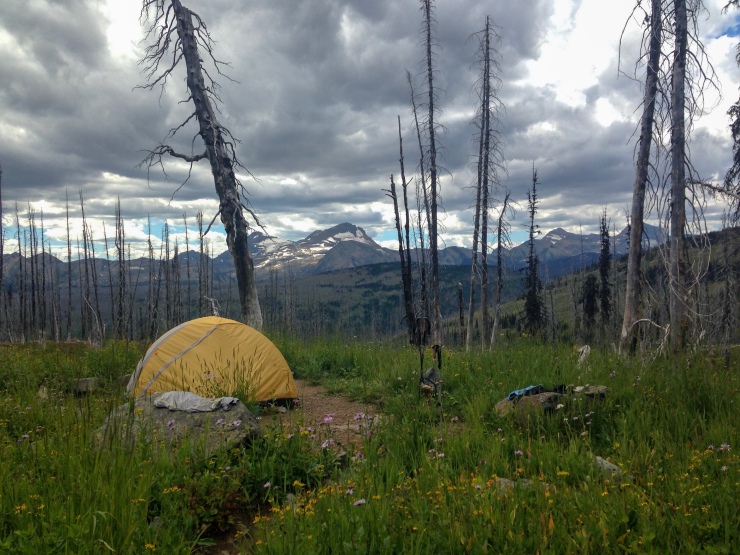 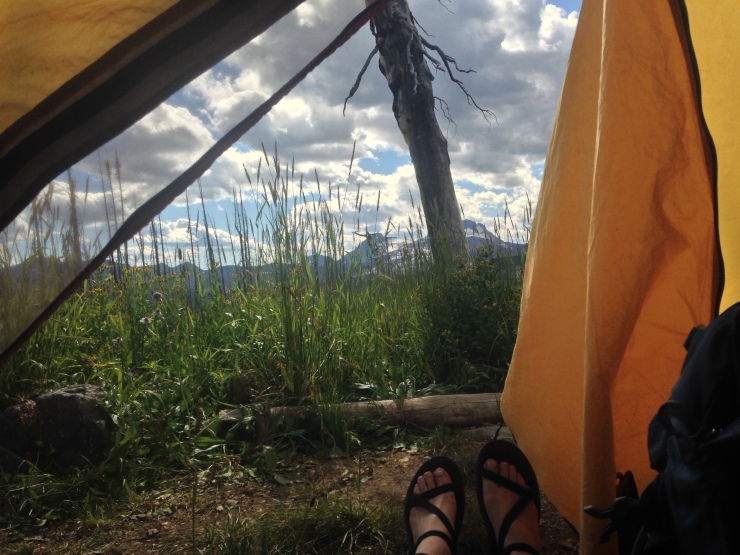 We set up our tent overlooking the skeletal trees and snow-capped peaks. We arrived at twelve, so a nap was in order. Nicholas was about to join until we heard voices. “What is that?” We listened closely as the echoes cleared to a distant warble of “heyyyyy, bbeeaaarr.” “I’m checking it out.” We left the tent and headed down the Flattop Mountain Trail. After 20 yards I gave up and let Nicholas wander toward the calls…and potential bear.

I heard footsteps and peered out the tent to see Nicholas return with a group of five guys. It turns out a grizzly was following them, and they were yelling to keep the bear at bay. We conversed at the cooking spot hoping one of the seven hikers would lend their stove to us. An hour passed watching them eat before Nicholas casually mentioned we forgot our stove 20 miles back. One of them offered, thankfully.

We made quiet footsteps in the morning following the Highline Trail/Continental Divide Trail. We would later take the Granite Park Trail back to our rental on the Sun Road. The day totaled 16.5 miles. 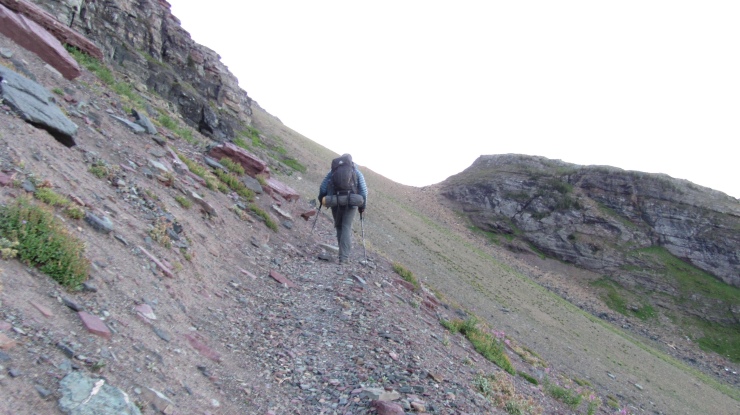 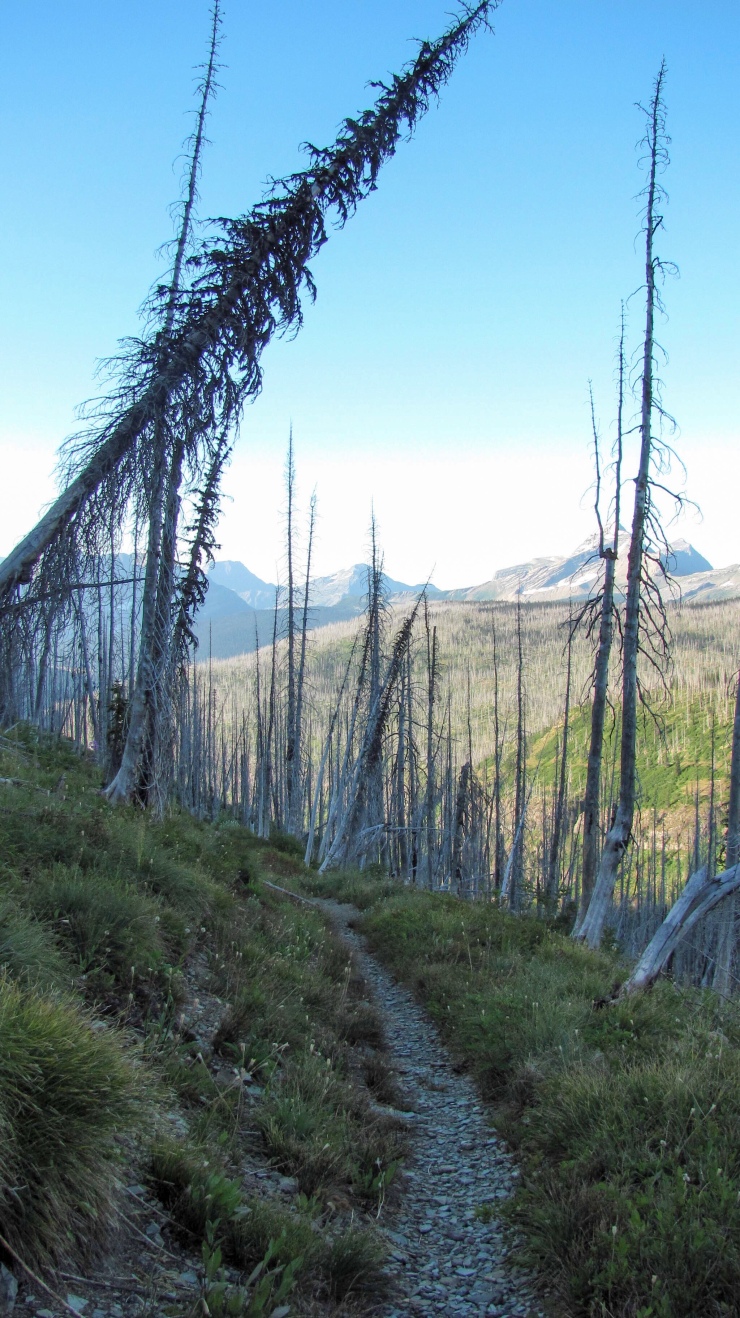 The trail transected the mountains, a dirt line that hugged the mountains’ treed and rocky sides. We were going along at a pretty good pace, about to approach a bend in the trail, when we halted. “Oh my god, Nicholas, there’s a grizzly cub coming towards us!” I immediately pulled out my bear spray and pointed it towards the large and well-fed cub–essentially a teenage bear.

“DON’T spray it! It’s just a baby!” Nicholas waved his arm in front of my readied spray. “But if there’s a baby, that means there’s a mommy.” Meanwhile, the bear proceeded to approach–fifteen, twelve, ten feet. The bear took a sudden, sharp turn off the path and into the tree line. SAVED. We were stunned. The bear had a raccoon tail–A RACOON TAIL. “What the…” “What the heck was that? A bearcoon?!”  I resumed Sonic speed hoping to get as far away from the mutant as possible. 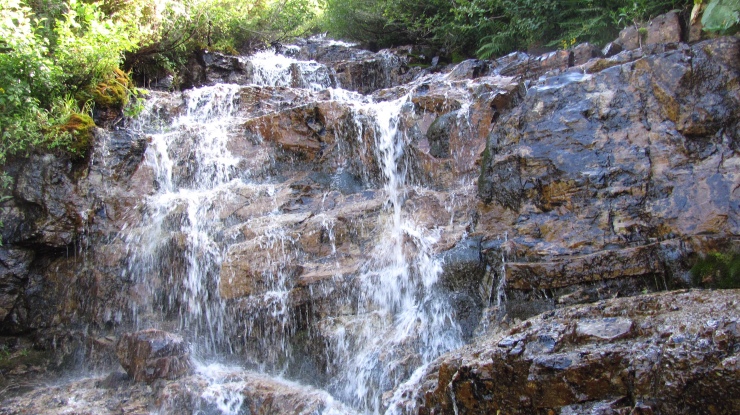 Once we got to our car, told our parents about our engagement, we researched what we saw. Google revealed it was not a bearcoon, but indeed a wolverine. Our wolverine was certainly eating well because he was huge compared to the results on Google images. I guess we got Lyle beat. We went into the wild and saw the wild.

(Stove note: we got our stove back–well, Peter’s–after a few email exchanges with Robin who found it at Thunderbird Pond. We ended up picking it up under a car, the designated drop spot.)