We planned a road trip to the Smokies in July, but somewhere beyond the misty mountains was pulling us, tugging us – the west.

We both yearned for sweeping fields, forests of pine, and snowcapped mountains. We booked plane tickets and changed course to Montana, Big Sky Country.

July 24, 2015, we flew to Spokane, WA, where we threw our packs into our rented sedan and drove five hours east to Glacier National Park.

We thought we’d arrive by six or seven p.m., having left the airport at one-ish, but our road trip philosophy wasn’t strict get-to-our-destination travel. We believed in the meandering of the road, the side sights, the good stuff that locals selfishly kept secret. Naturally, we stopped at a pull-off entitled, “Kootenai Falls Swinging Bridge,” a short hike to an epic river with highway-width cascades. I, for a moment, thought I might see Brad Pitt shadow casting in hopes to make a rainbow rise.

The path traced the river up a hill to the “swinging” bridge, a narrow noodle of timber stretched the span of the river. Our steps made spongy from the suspension; Nicholas immediately tested its stability by bending his knees repeatedly in a false jumping motion, sending vibrations to my feet. Wide-eyed and full of glee, he stripped his shirt and yelped into the wind, both arms extended in victory. 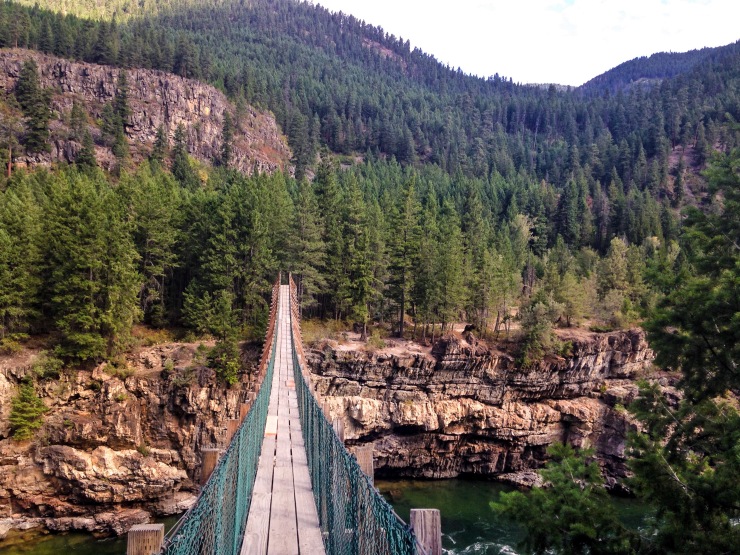 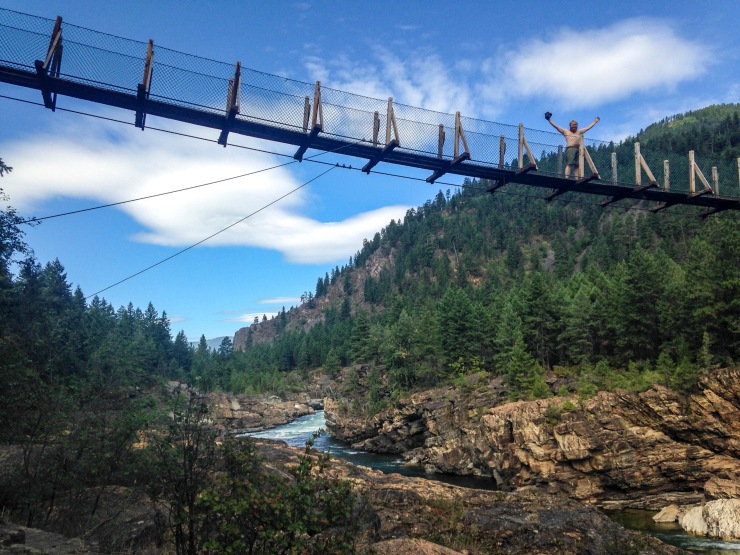 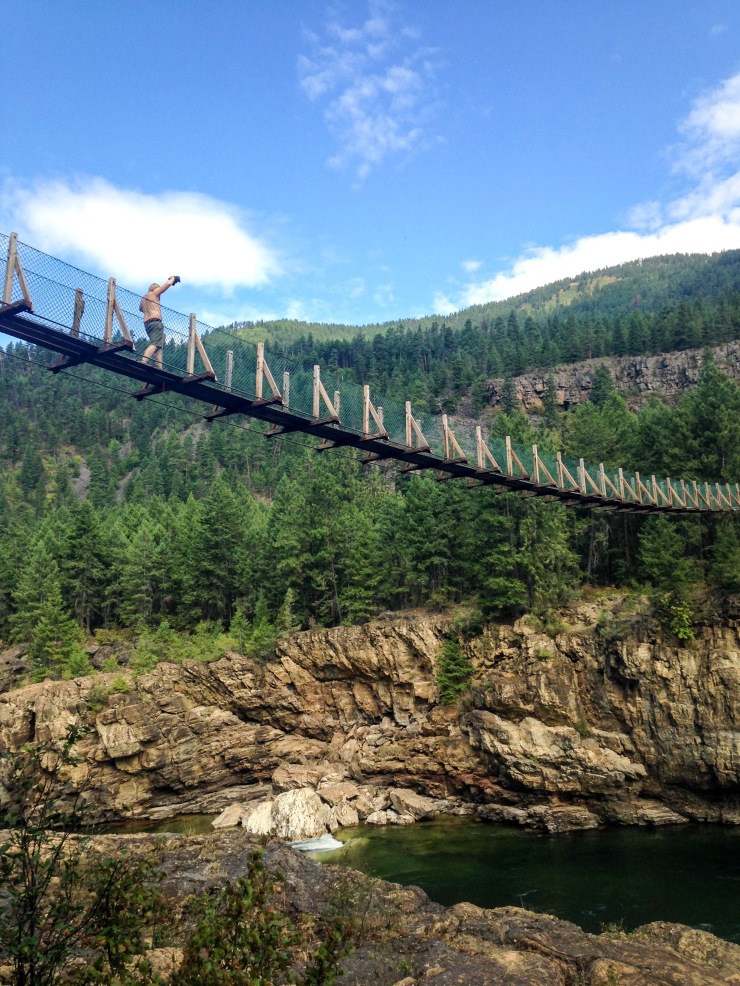 On our return to the car, we came upon a river-worn man – his skin creased leather and beard, white and long – whittling wood. He displayed his work alongside his picnic table. His carvings looked like him, like Nicholas. Men with long beards and wise eyes. He told us he comes to this spot almost every day to work. He was a Montana local, carving out his spot in the world. We purchased our favorite and wished the wood whittler well.

We later bought peaches from a farm stand and kept watch for a spot to feast. We pulled into another dirt crescent on the roadside and walked down a hill to a lake. Peach juice dribbled down our chins. Pine needles stuck to our hands. 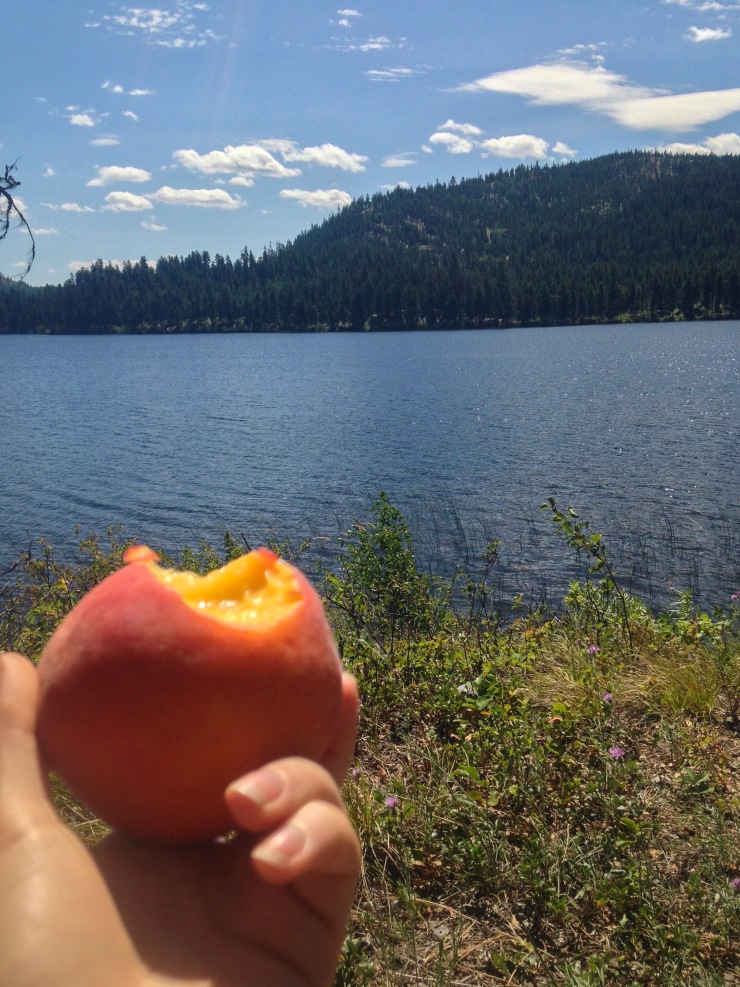 Northern Montana felt isolated, all winding roads infrequently travelled. We saw a campground sign and looked at the clock, approximately seven. We had two and a half hours until we reached Glacier. There would be no campsites if we arrived at 9:30 p.m., so staying put seemed the best option. The campground was directly on the Kootenai River, our site a trail-walk away from the rushing water. A quick evening dipped ensued; Nicholas plunged full-body and I pretended I was a river mermaid washed ashore. The next morning we brushed our teeth along the Koot and were road-born again.

We entered Glacier’s Going-to-the-Sun Road dumbfounded. Gray peaks serrated the sky, all so tall that we couldn’t see their tops from the car windows. We drove along the S-curves, snaking our way higher into the center of the park. The Going-to-the-Sun Road was considered a feat of engineering in 1933, when it was built. It was carved and at times stuck to the sides of the Rockies. Looking ahead the road appeared like a dark ribbon etched along the mountains. We stopped at the road blockage set before Logan Pass due to the forest fire on the eastern side of the park near St. Mary’s Lake. 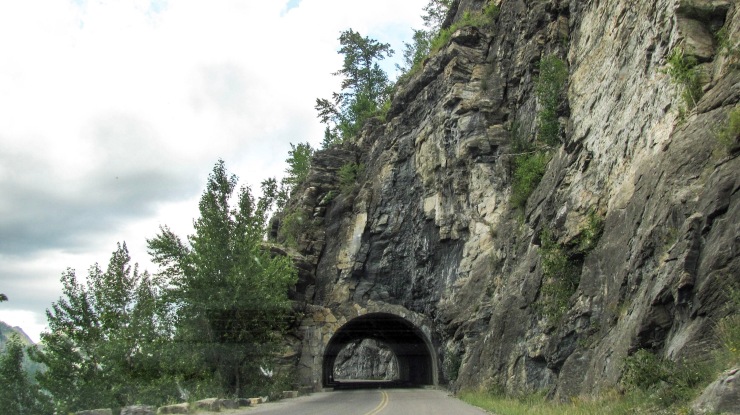 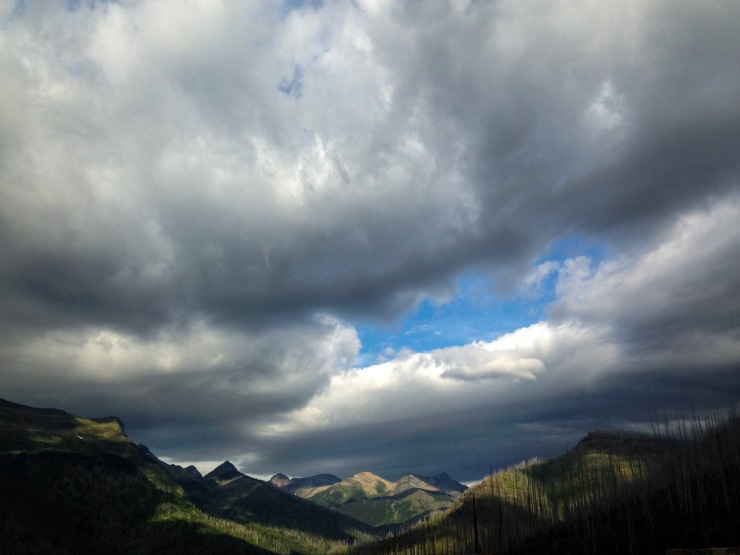 We decided to pick a small hike off the Sun Road to explore. We chose a 4.5-mile trek to Avalanche Lake. We started on the Trail of the Cedars and quickly figured out the trail’s namesake as we walked among giant red cedars and hemlocks. We crossed a small footbridge that over looked a glacier-fed gorge, the water a frosted blue. We turned left onto Avalanche Lake Trail, and soon enough we were in front of a panorama of mountains striped with white falls, feeding the aquamarine lake below. 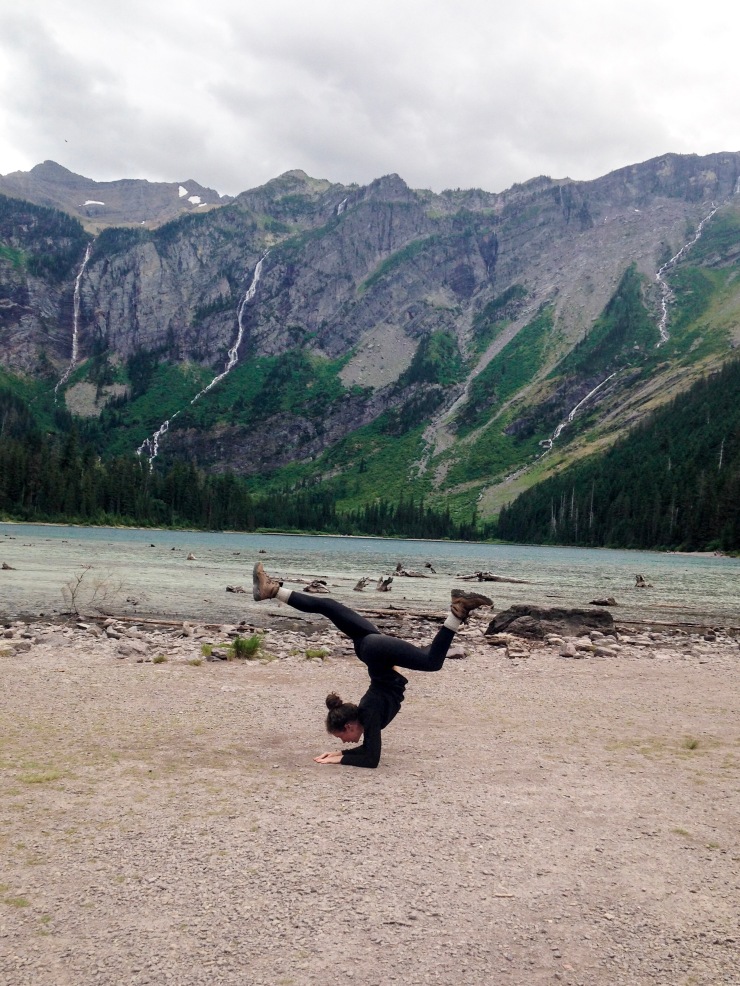 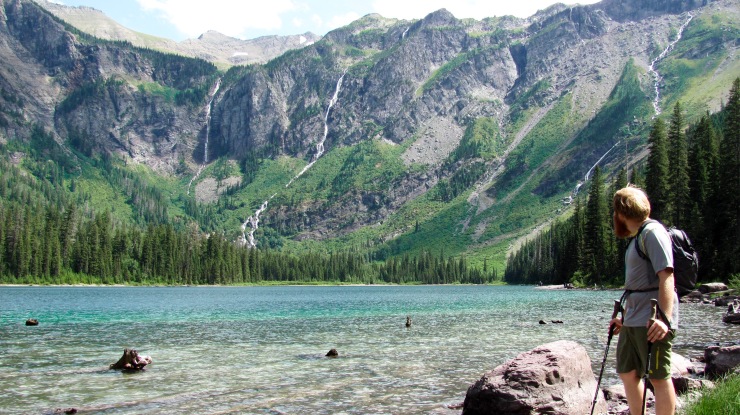 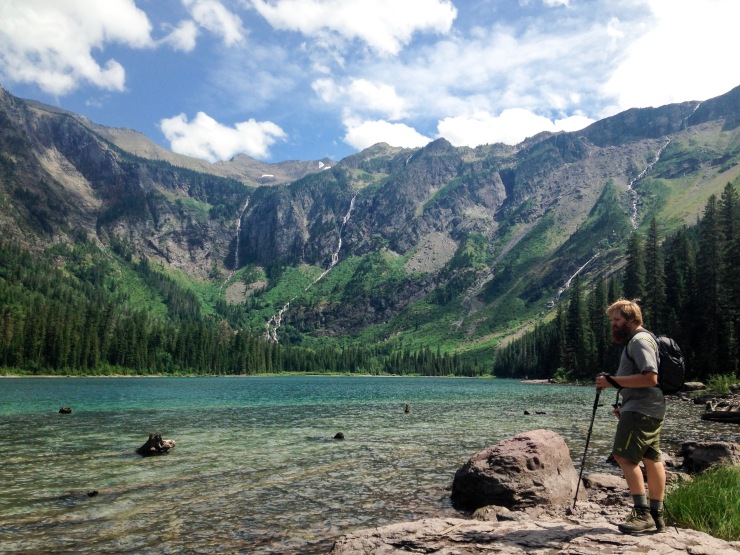 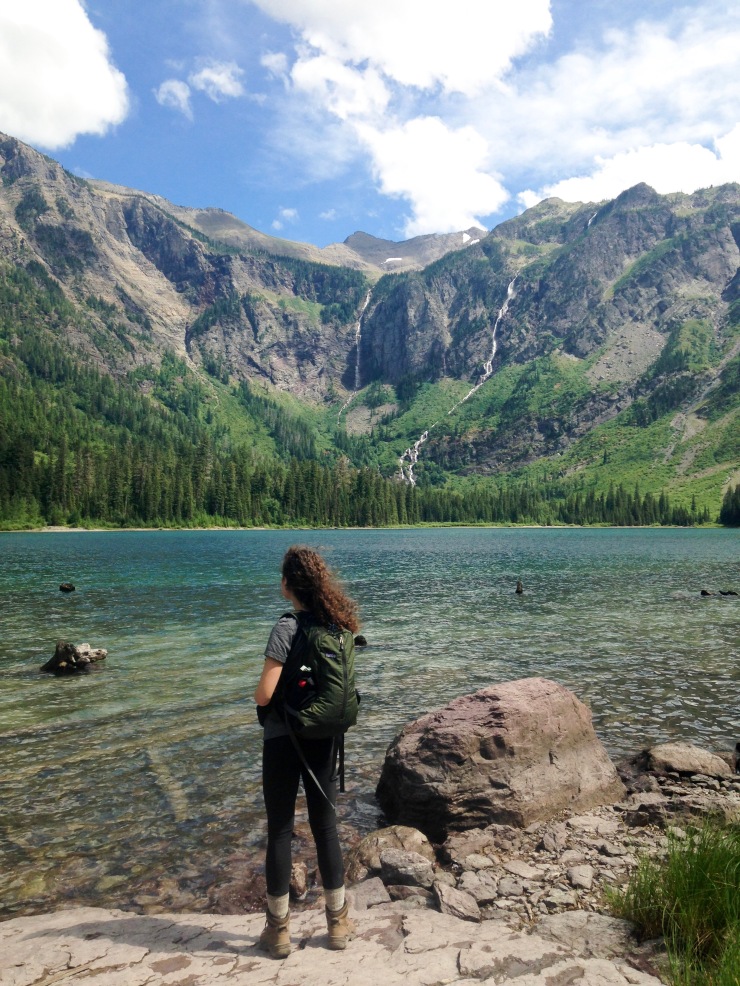 We returned to Hungry Horse, a town 17 minutes outside of the park, to camp. Full campgrounds discouraged us and led us to bushwhack into a patch of woods that only brought us to a cliff. Eventually we found the best spot in Hungry Horse: a sandy bank along a creek, or as Montana folk call them, a “crick.”

The sun warmed our tent as we swam and night darkened the sky, littering the abyss with white lights. I could feel my soul awaken; my love for Montana began.